Envisioning the world we want to co-create with our coalition partners generates excitement; transforming that excitement into action is where planning comes in. With a common goal in mind, a committed group of community members, organizational leaders, advocates, and practitioners can accomplish almost anything. For the Making Connections initiative, partners charted their journey toward mental health and wellbeing among men and boys by establishing coalition structures, intentionally mapping out steps and strategies, adjusting the path as they learned valuable lessons along the way, and setting benchmarks of success.

Bringing the right partners to the table

One of first activities the Making Connections sites engaged in was to develop a community coalition that would plan and lead the initiative at the local level (if a community coalition didn’t already exist). Since Making Connections focuses on men and boys of color and military service members, veterans, and their families, a top priority was having members of those groups at the table from the very beginning of the process. The people who are most impacted by community-level barriers to mental health know best what strategies make the most sense for their specific community. Based on those strategies, the sites could then engage the partners that would need to be involved. Making Connections sites included partners from a wide array of organizations including arts and culture organizations, schools, youth sports leagues, public health organizations, healthcare institutions, housing groups, employment organizations, university departments, faith-based groups, ethnic and cultural organizations, and others.

Making Connections New Orleans kept the concerns of their population of focus front and center as they thought about the make-up of their steering committee. Khalilah Collins of MCNOLA said, “We tried to build our coalition based on the needs of African American men and boys. Our coalition is made up of health and public health officials, employment/job readiness specialists, artists and community members. They all have specialized expertise in the various components of our programming.”

Learn more about topics related to building a coalition (like developing trust among coalition partners) in the Making Connections backpack section on Facing Challenges and Finding Solutions.

Making Connections coalitions adopted a variety of structures to do their work—fixed or fluid, formal or loosely formed. It was up to the members to identify the structure that best supported their work and enabled them to carry out their strategies and keep community members engaged. Two of the most important elements of coalition structure that needed to be determined were leadership and decision-making.

Leadership: While some Making Connections coalitions opted for leadership teams such as steering committees to guide the work, others relied on a “backbone” structure in which a backbone organization handles communications, administration, and other core functions for the coalition. The Making Connections sites also fostered leadership among coalition members who were not part of the “official” leadership through such practices as sending partners—instead of the project lead—to represent the coalition at conferences; collectively creating meeting agendas, agreements, and budgets; and actively engaging the community members from the population of focus in planning and evaluation.

The Nebraska Association of Local Health Directors (NALHD) serves in the backbone role for VetSET Nebraska, which works to ensure that Nebraska veterans and their families have the support and resources they need to successfully thrive in their communities. NALHD had an existing coalition before it began its Making Connections work, which grew during the initiative into a statewide, cross-sector Task Force focusing on veterans and their families. NALHD’s VetSET coordinates a steering committee made up of local health departments and key partners from across the state and facilitates regular meetings and training opportunities to ensure that veterans are provided every opportunity for accessing support and services.

Learn more about topics related to creating a coalition structure (like accountability) in the Making Connections backpack section on Facing Challenges and Finding Solutions.

Developing a theory of change

Over the course of their first year, the Making Connections coalitions carried out community assessments to understand what members of their population of focus felt were their communities’ great needs related to mental health and wellbeing and what they types of improvements they wanted to make. Some coalitions conducted one-on-one interviews, others used surveys or focus groups. They also used some of Prevention Institute’s tools and frameworks  such as THRIVE, the Tool for Health & Resilience in Vulnerable Environments, and ACE|R, the Adverse Community Experiences and Resilience framework. All of the assessments were guided to the greatest extent possible by people who represented the initiative’s community of focus, whether that be men and boys of color or veterans, military service members, and their families.

The Making Connections coalitions then used the information they gathered to inform their decisions about what strategies and programs would best address the needs of their population of focus. Each coalition developed its own “theory of change” and then an actionable plan to improve mental health and wellbeing in their community.

Learn more about topics related to developing a theory of change (like how to prioritize strategies and adapt to change) in the Making Connections backpack section on Facing Challenges and Finding Solutions. 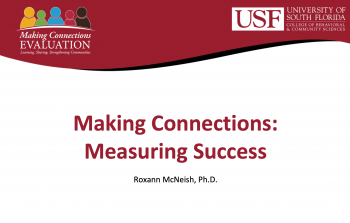 Evaluation was and continues to be an important part of Making Connections. Evaluation is how the Making Connections coalitions can tell if they are making progress in meeting their goals and whether they should make changes to their strategies to strengthen their work.

Making Connections is evaluated at two levels: at the national level to ensure that efforts across sites are collectively improving mental health and wellbeing among men and boys; and locally to ensure that strategies are changing community conditions and building a solid foundation for mental wellbeing.

For more information, please check out the archive of articles from the Making Connections Evaluation Newsletter. Some key articles include:

At the beginning of the Making Connections initiative, the organizations and coalitions involved had to set up the staffing and infrastructure necessary to carry out their work.

To staff their initiatives, they needed positions such as program coordinators or program managers; outreach specialists who would recruit and engage with community members; and mentors, including peer mentors.

The Making Connections sites also needed the skills to administer the grant they received from Movember. That meant they needed a staff member who could create a budget, track spending, and produce financial reports. They also needed to be able to do other administrative tasks like hiring, managing staff, and reporting on their progress toward achieving the goals they set out in their work plans.

That doesn’t mean that each Making Connections coalition hired a large number of people. In some cases, they hired new staff, but in other cases, they shared the work among different organizations in their coalition by sub-contracting with organizational partners who already had staff qualified to meet these needs. Several of the coalitions built on the principles of this work by hiring community members to work on the initiative or provided them with stipends to compensate them for contributing to the effort (see below for more information).

Because the Making Connections coalitions are based in communities that have experienced many different types of trauma, including poverty, violence, and racism, they found it valuable to provide their team members with training about how to apply a trauma-informed approach in their work. Click here to learn more about what it means to take a trauma-informed approach to community engagement.

They also discovered the importance of orienting and frequently re-orienting team members and partners to the Making Connections philosophy and approach. This helped when there was staff turnover, which is a normal occurrence at community-based organizations.

By repeatedly revisiting the initiative’s philosophy and approach with team members as well as preparing and mentoring them to take on additional roles and responsibilities, the coalitions reduced the disruption that naturally happens when a team member moved on.

Read the Facing Challenges and Finding Solutions section of the Backpack to learn more about overcoming the challenge of staff turnover.

Program administration as a value statement

Making Connections is guided by a set of principles and values that include health equity, taking a gendered approach, upstream prevention, community-level systems change, and authentic engagement. The coalitions incorporated these principles into their administrative infrastructure through their hiring and budgeting practices.

Many of the Making Connections coalitions prioritized hiring staff who were members of the communities they were working to improve. By doing this, they acknowledged the value of the expertise that community members themselves can bring to understanding, connecting with, and communicating the experiences of their peers. For example, Resilience Grows Here in Canton, Connecticut focuses on improving mental health for veterans, so they hired staff members who are military family members or veterans.

Beyond hiring staff members who are grounded in the communities where the work was being done, some Making Connections sites also provide stipends to community members for their contribution through activities such as attending coalition planning meetings, program development meetings, or evaluation sessions. This shows participants that the people leading the initiative value their time and talents and understand how difficult it can be for community members to dedicate their limited free time to a community improvement project.

Making sure some part of the budget goes to community members and community-based organizations also sends a message to the community that the initiative wants to reinvest in the community and support its financial health.