What Does Being A Man Have to do with Being Healthy?

This blog was authored by Cody Ragonese, lead author of Promundo’s new report, Masculine Norms and Men’s Health: Making the Connections. A thought leader in men’s health and wellbeing, Promundo supports Prevention Institute’s “Making Connections for Mental Health and Wellbeing Among Men and Boys” initiative, funded by the Movember Foundation. Making Connections is a national initiative made up of 13 community-based coalitions that are working to improve community conditions that can affect the wellbeing of men and boys of color and military servicemembers, veterans and their families.

This blog was authored by Cody Ragonese, lead author of Promundo’s new report, Masculine Norms and Men’s Health: Making the Connections. A thought leader in men’s health and wellbeing, Promundo supports Prevention Institute’s “Making Connections for Mental Health and Wellbeing Among Men and Boys” initiative, funded by the Movember Foundation. Making Connections is a national initiative made up of 13 community-based coalitions that are working to improve community conditions that can affect the wellbeing of men and boys of color and military servicemembers, veterans and their families.

Promundo recently released a report entitled Masculine Norms and Men’s Health: Making the Connections. And the report attempts to do just that— determine exactly how masculine norms – or ideas about what it means to be a man – are 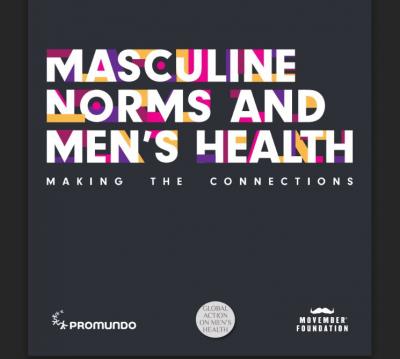 connected to men’s health outcomes globally. The takeaway message is quite clear: there is a common subset of masculine norms – that men around the world subscribe to – which act as a driving force in men’s poor health.

As a young man in my mid-twenties, this report comes at a time of reflection for me. It is difficult to ignore the realities of growing up with a prescription of what it is to be a man. Creative flexibility in the way we act is limited by the socialization of masculine norms. I question whether my friends and I would have turned out differently if we were not policed by peers and adults? “Man up.” “Don’t cry.” “Take it like a man.” “Don’t be a girl.” “Grow a pair.” These statements may sound familiar to you.  On playgrounds, in locker rooms, classrooms, and homes, many boys are guided by a single script of how to act, talk, and treat others.

This report tells us that these specific gendered norms have, and will continue to, manifest into harmful behaviors. And that these behaviors will ultimately result in illness and injury.

This report also takes a gender-relational approach, meaning that it makes the case for why men’s health matters for everyone. Men’s health clearly matters for men themselves, but it also greatly impacts women, who may bear the burden of care for sick and disabled men; children, who may experience adverse outcomes from the poor health of caregivers; and societies as a whole, which bear the social and economic cost of men’s illness and premature death.

In addition to taking a gender-relational approach, this report also recognizes the vulnerabilities certain men face at the intersections of race, class, ethnicity, and sexuality as a result of systemic and structural forces. The social factors, among others, create various contexts in which men conceptualize their masculinity, health, and the health of those around them, resulting in health disparities amongst men as a group.

By analyzing the 2016 Global Burden of Disease data, this report identifies the leading causes of men’s morbidity and mortality globally: poor diet, tobacco use, alcohol use, drug use, unsafe sex, occupational hazards, and limited health seeking behavior. These seven health risk behaviors contribute to over 50 percent of male deaths and 70 percent of male morbidity. In addition to living six years less than women do, the report also reveals that men experience higher age-standardized mortality rates in 19 of the top 22 causes of death globally.

In every region of the world, the data is very clear—men engage in these unhealthy behaviors at far greater rates than women do. The thesis of this report aims to provide an explanation for this phenomenon. Synthesizing articles and reports from around the world, the report concludes that initiation and continued engagement of these behaviors is central to the way men see their masculinity and manhood. In short, common masculine norms, like emotional control, self-sufficiency, power, aggression, risk taking, and hypersexuality, largely contribute to the way men behave, which in turn, lead to poor health outcomes. The report takes each of the seven health risk behaviors and explores their various connections to the social factors that pressure men into adhering to a gendered script of what it means to be a man.

As the common discourse about what is and is not socially acceptable for men quickly evolves, reports like this are useful to provide the evidence and background as to why masculine norms and men’s health matters—not just for men, but for society as a whole. The report is also a starting point for constructive discussions, and motivation to start thinking about the part each of us could or already do play in keeping ourselves and our communities healthy.

Do we perpetuate or passively propagate these harmful norms? Or do we lead by a positive example and actively encourage others to do the same?  The answer for this provides an opportunity to change the trajectory for future generations.

* Related Research by Promundo: The Cost of the ManBox