Welcome to our media digest for the week ending May 1, 2020! Each week, PI compiles a round-up of the latest public health-related news, with an eye toward media framing and language, particularly as they relate to the role of primary prevention. The views expressed in these articles do not reflect those of Prevention Institute.

The British Medical Journal published a rapid health impact assessment conducted in Scotland on the effects of physical-distancing policies and recommendations to mitigate adverse effects on family relationships and social isolation. 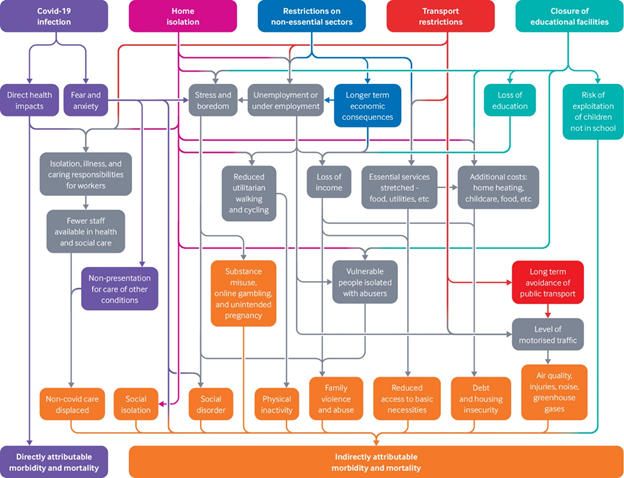 California Governor Gavin Newsom announced a three-part plan to distribute food to Californians in need -- including partnerships with local farmers and ranchers, a plan to distribute 21 million pounds of fresh food per month, and expansion of CalFresh benefits to online purchases, and a boost in CalFresh benefits for families whose kids would usually receive free or reduced-price meals at school.

The Washington Post reports on the burden of COVID-19 falling on workers who cannot practice physical distancing without risking their livelihoods. “State and local health departments do not publish the occupations and living conditions of everyone who tests positive, so there is no comprehensive analysis of who is getting sick. But interviews with doctors and public health officials, and data that has been made public, paint a portrait of a pandemic that increasingly is infecting those who have limited ability to socially distance. “I had two people that work in a grocery store, one person that works in a day care and another person that works in housekeeping,” said J. Luis Nunez Gallegos, assistant medical director at Unity Health Care Upper Cardozo Health Center in the District’s Columbia Heights neighborhood. “They all had contact with a covid-19-positive person at work.” When he told patients to quarantine, many replied that it wasn’t that simple. “They are afraid of losing their jobs,” Nunez said. “They are anxious their employers won’t respect the quarantine, or that two weeks seems too long, and they don’t always have the savings to get by.”

Armed protesters entered the Michigan capitol building on Thursday to protest ongoing COVID-19 lockdowns. “Hundreds of demonstrators — some of them heavily armed — crowded into Michigan’s state capitol Thursday afternoon to protest against Democratic Gov. Gretchen Whitmer’s shelter-at-home order. The demonstration began outside the capitol early in the day in heavy rain, but later in the afternoon, police allowed several hundred protesters — many not wearing masks — inside the building itself…  The “American Patriot Rally” was organized in response to a vote being debated in the state legislature Thursday on whether to continue Michigan’s state of emergency, which was declared on March 10 to address the coronavirus pandemic. The Republican-held legislature ultimately voted to revoke the emergency declaration Thursday as protesters looked on. Republican state legislators are now preparing to sue the governor over her shelter-at-home order, despite a state court ruling Wednesday that said the order was constitutional.”