Therapy dogs were not originally part of the plan for Resilience Grows Here (RGH), an initiative dedicated to fostering the health and resilience of veterans across 10 towns in Farmington Valley, Connecticut.

Therapy dogs were not originally part of the plan for Resilience Grows Here (RGH), an initiative dedicated to fostering the health and resilience of veterans across 10 towns in Farmington Valley, Connecticut.

After receiving a grant to partner with Prevention Institute and the Movember Foundation in Making Connections for Mental Wellbeing Among Men and Boys, the Resilience Grows Here coalition brought together community members for brainstorming sessions and interviews to explore strategies to elevate veterans’ mental wellbeing.

While the idea of a therapy dog was appealing, the group dismissed it as too expensive, she said. “The evidence was there, but it was certainly not in the plans because of the cost.”

But the concept resurfaced. “I did a key informant interview with an ex-marine who had been in Fallujah, an amazing young man who came into the office,” Justine recalls.

They met in a conference room that was lined with large sheets of paper filled with ideas the RGH coalition had been considering.

“On the corner of one of those pieces of paper was written ‘Dog’ with a huge big question mark,” Justine said. “And this veteran, who was incredibly agitated and angry, was pacing backwards and forwards and looking at these lists and saying, ‘That’s not going to work’ and ‘I don’t know about that,’ and ‘Why would you expect veterans are going to want this?’ And he kept going back to the dog part and saying that was the only thing that was going to work.”

She explained that the coalition had determined that the dogs, which cost tens of thousands of dollars to adopt and train, were out of reach, and that the group was focused on creating a community garden and developing other resources.

The veteran offered her a deal: if she could find a dog, he’d find a way to get it trained.  “Within 24 hours, he had a trainer calling saying, ‘If you can get me a dog, I’ll train it and I’ll do it for nothing,’” Justine said. 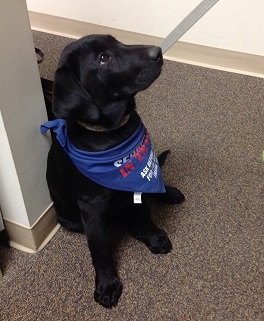 Justine just happened to have a litter of puppies at home. She had mated her Lab with a therapy dog to breed puppies with good temperaments and the puppies had been born three weeks earlier on November 11— Veterans Day.

For the next few weeks, the trainer observed and worked with the litter and ultimately selected two, including Anzac, the first born, for therapy training. Since then, Anzac has been a central part of the RGH initiative—which also includes a community garden. When the 1,900 members of the 103rd Airlift Wing convene at nearby Bradley Air National Guard base for their monthly drill weekend, Anzac is there, working the crowd, paving connections for clergy and mental health workers who support the reservists.

“They’ve seen an increase in how much the guys are willing to engage with them because they kind of broke the barrier over the dog,” Justine said.

She’s had similar experiences herself moving through the community with Anzac, who accompanies her to work every day. One afternoon while waiting for a training session, she decided to bring Anzac into a liquor store for a bit of practice. She had him sit at the register and wait for her, and a young man carrying a 24-pack of beer approached and asked if he could pet the dog.

“He put the beer down and he sat on the ground next to Anzac and started petting him and asked what he was for. I explained he was going to be a veterans PTSD community dog, and he said, ‘I was in Fallujah and am 100% disabled,’ and he started talking to Anzac and said, ‘Nobody really gets it, do they?’ And Anzac was cocking his head left and cocking his head right and the young man was patting him and said, ‘You get it; I know you get it.’”

Ideas for ways to include Anzac and potentially other service dogs in promoting wellbeing among veterans continue to emerge from the community, said Farmington Valley Health Director Jennifer Kertanis. “These dogs are not supported by the Veterans Administration, and a doctor won’t write you a prescription for a dog, and yet the veterans are the first to tell you these are really helpful and valuable in treatment and coping,” she said. “One of the things we’d like to do is really explore if there is a business opportunity for veterans, or a volunteer opportunity where veterans train these dogs and make them available to others that need them.”

Just recently, the RGH coalition heard from some other dog trainers interested in collaborating, Justine said. “It’s something we didn’t anticipate or expect but it’s got the chance to flourish,” she said.  “We continue to be humbled by something we never planned on that has been one of the most effective and fun ways to connect with veterans. He’s the biggest ice breaker on the planet.”